The main driving forces behind SD-WAN are cost-saving and improved WAN connectivity. Broadband circuits are cheaper than private MPLS WANs. Even though Internet circuits come with a risk of security and congestion issues, that are absent in private WANs, according to some analyzers the cost difference is so big that sometimes it’s cheaper to buy a big Internet pipe and a firewall at every single site, than rely on MPLS circuit at each site. Furthermore difference is even bigger when you consider that, for most networks, most of your branch traffic is destined for the Internet - no need of WAN anyway.

The larger question is whether you even need WAN optimization alongside an SD-WAN architecture. In recent years, many protocols, such as Microsoft Server Message Block, have evolved to function adequately without WAN optimization. Specific application optimizations that overcome an inefficient protocol's sluggishness in the presence of WAN latency are decreasingly useful.

In today's WAN, the primary advantage to optimization is compression and deduplication. That said, as encrypted data streams - which are not easily compressed or deduplicated - become more common, the benefit of WAN optimization shrinks.

Since internet circuits tend to be cheap, businesses can afford to increase WAN bandwidth compared to private Multiprotocol Label Switching (MPLS) circuits. In addition, SD-WAN can send traffic across more than one circuit at a time, increasing the available WAN pipeline even more. That begs the question: is WAN optimization actually required to achieve an acceptable user experience? This is a nuanced issue that can only be fully answered by analyzing your specific WAN traffic mix.

The new trend in the enterprise network is the ability to deliver part of the company's proprietary traffic through broadband connection and thus avoiding as much as possible the expensive leased lines (such as MPLS). Also performing load balancing between different up-links will increase significantly the throughput.

• Being a separate device in already existing infrastructure

In this case the SD WAN device just separates the traffic toward existing devices which are used to provide MPLS service, L3VPN service and access to the internet

• As a replacement of existing infrastructure

This is the best case from customer perspective since it provides all functionality in single device (PC for example) which could have three VM instances connected in service chain by virtual interfaces. Each VM provides specific functionality - SD-WAN, MPLS, L3VPN (including encryption) or plain internet access. For that functionality user could use third party MPLS and L3VPN provisioning.
• Using separate device for MPLS only

There will be a case when user want to continue using existing MPLS service but with low bandwidth just for most critical traffic. The solution is to combine SD-WAN and L3 router (L3 VPN and Internet access) in single box (as described above each will be VM instance connected in service chain). The aim is to extend existing MPLS infrastructure at the user side.

SD-WAN appliance is a software suite, consisting of two packages:

A basic diagram of the feature is shown on next picture. The Central controller and analytic engine are combined in single control entity. 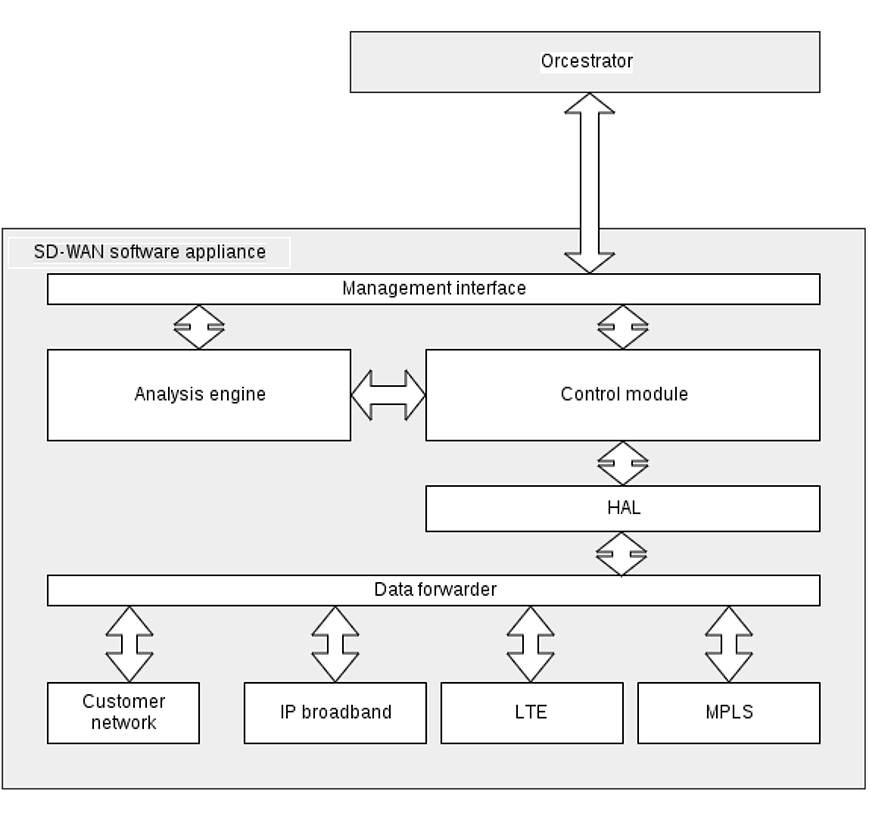 Here we have a configuration system which could be any web based application able to
interpret the interface provided by the control module.

Orchestrator must use standard protocol interface for communication with control modules - currently suggested is NETCONF. Of course any protocol could be used. For better compatibility we should have a plugin for some of the most used management systems/orchestrators It shall provide initial configuration for a single control module (ZTP); Orchestrator will receive status signals/traps for from control modules and in this way will have complete view over the network - e.g. at least to know logical relation between all involved modules providing SD WAN for single customer network (enterprise). Based on link characteristics and traffic parameters to take decision for best flow paths etc.

Data forwarder is the module that performs actual data forwarding, but it also virtualize the various types of uplinks, and makes them transparent for all modules above. It must be able to perform per flow based load-balancing. Optional features can be PBF - Forwarding packets by ACLs/QoS and LPM. The standard L3 functionality such as IP tunneling, GRE, IPSec, L3VPN and NAT must be supported as well. Very big advantage will be MPLS tunneling capability. However this is targeted to customer with already existing MPLS infrastructure which tend to be enhanced.
Overall system requirements (environment and software capabilities)


On top of all this infrastructure we can run any software that can give better forwarding performance or security - such as firewalls, protocol accelerators, etc.

Send us a message

If you want to say something to us, feel free to do it